Istanbul has always been one of our favorite places to visit. The rich history and culture serve as a lasting inspiration for design and planning.  Over the years we have made it a point to stop in Istanbul and soak the sounds and sights when ever we can. Local cuisine, tea and the famous Turkish coffee, on a terrace somewhere near the Galata Bridge, are worth the 10+ hour flight.

Starting from the airport, you see an amalgamation of the west and the east; with blonde tourists from Europe, sporting long boots and mini-skirts, along with women in veils with heavily lined eyes.  The fascinating place of Turkey in the world’s geography and history shows in the faces of its people, who look like the perfect blend of east and west. Same character is evident in the Architecture and the geography; such as the merging waters of the Bosphorous, Maramar and the Black sea.

One of the unique cultural treats in Istanbul is to eat delectable fresh grilled fish in baguettes off of fishermen’s boats near the galata bridge; a tradition that may discontinue if Turkey becomes a part of the European Union (because of stricter health standards). The boats frequent the Bosphorous bridge, connecting the strait that forms part of the boundary between Europe and Asia. Over the years this ritual has become a tradition when in Istanbul. Other rich activities  include long walks, along the Eyup cemetary that end up in places like the Pierre Loti cafe, where you can see most everything Istanbul is famous for while enjoying yet another cup of tea or coffee. The long walks are also enriched by local arts and crafts.

Istanbul’s rich history has seen Greek Settlers and the Roman siege;Topkapi palace of today stands on Greek ruins. Constantinople, with him brought Christianization of the area, along with Byzantine churches, celebrating spirituality. Byzantine Architecture mixes Graeco-Roman and Oriental elements. The streets and their architecture offer a history lesson, showing subtle transition from Byzantine to Islamic Architecture.  In the church Hagia Sophia, which is now a museum, all the principal forms of byzantine Architecture are present, like the rotunda covered with a dome, supported by half-domes over apses. Other prominent elements include the wide atrium with colonnaded passages and pendentives, which are the triangular elements that facilitate a circular structure (dome) on a square plan.The main dome transfers its lateral load to the half domes and arched buttresses, which transfer the load down to four piers.

The most eminent architect of the Ottoman Istanbul was Mimar Sinan; he designed the Suleymaniye Mosque in Istanbul. Suleymaniye Mosque is one of the most monumental examples of Ottoman architecture. Hagia Sophia was a significant source of inspiration for Sinan for this mosque. Mosques in the Ottoman architecture included additional facilities  such as a school, a hospital, a public kitchen and a bath. One of our favorite places to eat is a local hangout where people share tables and eat fusulia (curried beans) with freshly baked bread and ayran and chat in the shadow of this mosque.  Lale Bachesi (picture on the top left), a local coffee shop and hookah nook nearby is another favorite. The cafe sports a sunken courtyard and brick walls covered that are covered with plants; adding intrigue to the light from the fire pits at night.

Below is a collage of photos taken on 3 different occasions since 2007. 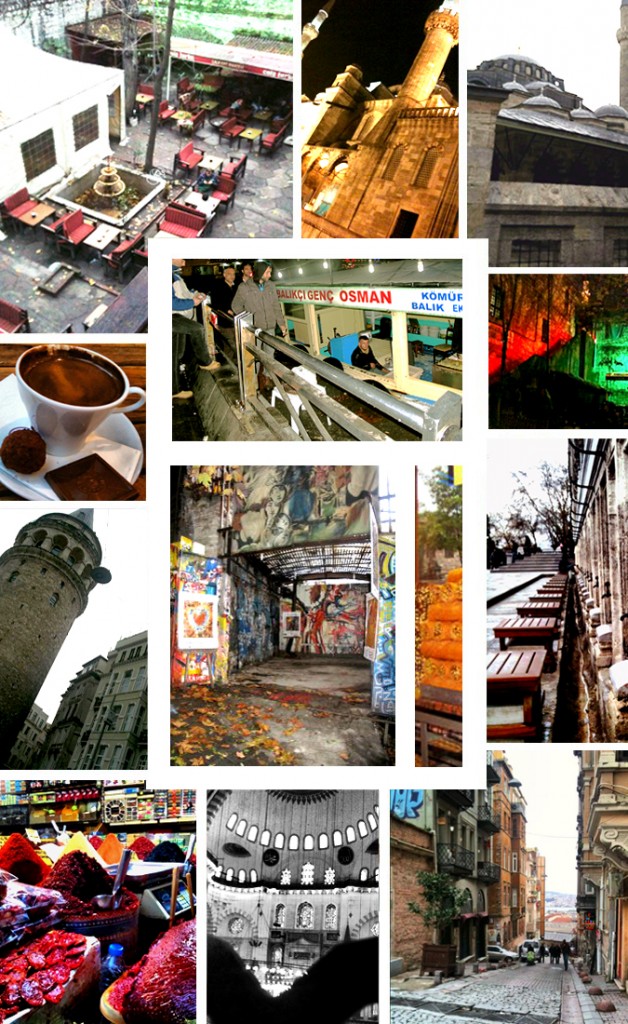